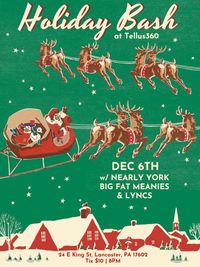 21+ _ $10 Cover _ 8pm Nearly York Nearly York is a 4-piece alternative pop band from Lancaster, Pennsylvania. Officially formed in 2018, the band began years before when founding members Lucas Gienow and Brad Hartman began writing music during their time together in college. After graduation, Gienow became self employed as a recording engineer in Lancaster, and Hartman began working in live sound at Clair Global in Lititz, PA. Still passionate about pursuing a career as performers, the duo recruited two other individuals with years of musical experience – Jonathan Poorman and Christopher Mundy – to help them record some music they had written during college. Following a successful Kickstarter campaign, the music recorded for this project went on to become Nearly York’s debut full-length album, 'Time Alone,' featuring the standout singles – “Take You There” and “Stuck in These Ways.”

Big Fat Meanies With an unusually large number of musicians comes an unusually large palette with which to paint. Big Fat Meanies strives to write music with an infinite palette, without boundaries or limitations. Their songs blur the lines between genres, and blend the different musical backgrounds of each member in perfect harmony. Their debut album The Time Has Come… reflects these qualities, and combines an eclectic mix of rock influenced sounds that collide into a monstrous nautical themed soundscape. Big Fat Meanies have headlined various venues in their home city of Lancaster, Pennsylvania including The Chameleon Club, Tellus360, and Club XL in Harrisburg. BFM has also provided regional support for national touring acts such as Thank You Scientist, Bent Knee, and Stacked Like Pancakes. To lend an ear to Big Fat Meanies for a night is to guarantee one thing: fun. Whether they were playing to a room of 10 people in their early days, or a room of 200 now, the band’s high energy and infectious stage presence never fails to get a crowd moving.

LYNCS LYNCS, SINGER-SONGWRITER AND MULTI-INSTRUMENTALIST, BLENDS THE ELEMENTS OF FOLK, POP, AND INDIE ROCK INTO HER OWN CHAPTER OF MUSIC. NOTED FOR MEMORABLE AND CONNECTIVE LYRICS, HER DEBUT WORK, “THE SAFETY EP”, WAS SELF RECORDED, PERFORMED, AND RELEASED AUGUST OF 2018. AFTER TOURING LOCALLY AND OPENING FOR ARTISTS SUCH AS YOUNG THE GIANT, NEW VICES, AND AUGUST & ALDEN, LYNCS RECORDED AND RELEASED “IF YOU JUST” AND “BLACK HOLE” IN 2019. WXPN QUOTES HER JOURNEY AS “EASY-GOING ACOUSTIC TUNEAGE TO ETHEREAL ELECTRO-POP SINGER-SONGWRITING.” KNOWN TO HER FRIENDS AND FAMILY AS JACQUELINE HYNES, LYNCS STARTED HER CAREER IN THE RED-ROSE CITY OF LANCASTER, PA. SHE SHOWED INTEREST IN MUSIC FROM THE AGE OF 6 AND BEGAN LEARNING EVERYTHING FROM PIANO TO UPRIGHT BASS. SHE LANDED A SPOT WITH THE HERSHEY SYMPHONIC ORCHESTRA IN HIGH SCHOOL AND HAS PERFORMED IN MANY CATHEDRALS AND THEATERS SUCH AS CARNEGIE HALL. ​AT THE AGE OF 18, LYNCS STARTED HER DEGREE IN MUSIC BUSINESS TECHNOLOGY AT MILLERSVILLE UNIVERSITY HAVING RECEIVED THE RISING STAR AWARD. SHE RELEASED TWO B-SIDE SINGLES, THE FIRST TITLED “ROSE COLOURED EYES”. “THE MOMENT”, HER SOPHOMORE SINGLE, HAS BEEN FEATURED ON LOCAL INDIE PLAYLISTS AND BLOGS. OVER THE NEXT FEW YEARS, LYNCS EVOLVED FROM STUDENT BASS-PLAYER TO GUITAR ENTHUSIAST AND STARTED WRITING HER OWN INFECTIOUS MELODIES AND SONGS. THIS LED HER TO START HER OWN PROJECT UNDER THE ARTIST ALIAS, “LYNCS”, FINDING WHAT CONNECTS US ALL